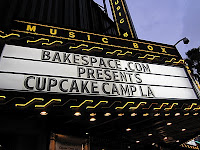 wow what can i saw about my first ever cupcake camp. i had so much fun today meeting so many people, watching everyone walking around full of excitement as they gathered cupcakes and most of all hearing others compliment me on my cupcakes. this was my first time getting out there with my creations. there were a total of 56 bakers for this event and so far the biggest turnout for any cupcake camp.. the best part was it was a non profit event. all profits from the event went to charities. the charities were angel acres horse haven rescue, invisible people tv and american tortoise rescue. the venue was AMAZING. it was at the music box theater in hollywood. 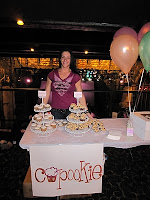 they are already talking about having another cupcake camp la again hopefully in the summer. i look forward to it. i know what to expect next time around & will definately be there. thanks to babette at bakespace for putting this event together. ♥

Andrea
Los Angeles, CA, United States
Hello, I'm Andrea! I am an artist with a deep passion for creativity, color & food. I love all things art! Cupookie is my love for cupcakes & cookies. From baking to decorating to eating...I enjoy it all. It lets my creative side run free while satisfying my sweet tooth. I love inspiring and being inspired. Thanks for stopping by ♥